Best Husband Ever and I recently took a trip to Europe. He’s an architect and does projects free as a ministry for missionaries and other faith-based organizations. It was one of these projects that took us to Spain. Since we were already going to be in Europe, why not add a little personal adventure?

Ed’s paternal ancestry is German, my maternal ancestry is Polish. We’ve always wanted to visit those countries and this was the perfect opportunity! We were fascinated by the history and architecture. The food was wonderful and the people were very helpful and friendly. Of course, being an image consultant, I couldn’t help but notice the fashion trends in these countries, too.

Just as in the U.S., all four of the Style Personalities could be found: Classic Modern, Pure Natural, Style Fashionista, & Creative Original. Classic Modern is the most common Style Personality, in general, even the U.S. but it was overwhelming so in the areas we visited in Poland and Germany. Pure Natural seemed to be a strong second and even the Classic Moderns had a Pure Natural leaning. Walking and cycling to get from one place to another is pretty standard in these towns, among all ages. I can understand how comfort would need to play a big role in their fashion choices.

Accessories seemed minimal with scarves being the most popular. Large, chunky, statement necklaces that are popular in the States were a rare sight. Maybe they’re worn more in the warmer months? I don’t know. It was early October when we visited and the temps were a bit cool.

You know how in the U.S. we rarely wear stockings/pantyhose? Well, the opposite seemed to be true in Poland and Germany. In the towns we visited, I saw no bare legs. It wasn’t just among the older ladies, either. Even the young teens and 20-somethings wore either flesh-tone or sheer, sometimes opaque, colored hosiery with their dresses and skirts. Maybe the weather played a factor in that, as well. Back home it doesn’t seem to matter! Even in the dead of winter ladies will go bare-legged or maybe wear opaque tights but not flesh-toned stockings! BUT the hosiery trend seems to be shifting away from bare-legs…maybe Poland is a step ahead of us in that.

Fashion tendencies in Spain were a little different. Scarves were also popular there but I saw a few more statement necklaces. Bare legs weren’t a problem and, even though stockings weren’t worn as much, it wasn’t unusual.  All four Style Personalities were present. Classic Modern was again dominant but with a strong second in Style Fashionista. The majority of Classic Moderns tended to have a hint of Style Fashionista.

We were in a bigger city in Spain. Cycling wasn’t common except in athletic clubs. People walked a lot but also took public transportation and drove. I’m sure this lifestyle plays a factor in there being more Style Fashionistas. Comfort and practicality isn’t a crucial.

The color and style trends I saw in the shops were very much like what we’re seeing here. Most women wore neutrals,  like you’d seen in New York or other eastern U.S. cities. In the shops I saw lots of florals, as animal prints and plaids. In Spain, glen plaid was particularly popular. Shoes, trousers, jackets, tops, scarves…it was everywhere!

For the most part the fashions were very much like what is found in the United States. Women are women all over the world and like to look pretty and stylish in the ways of their culture. 🙂

A clothing shop in Poland:

A little shop in Spain: 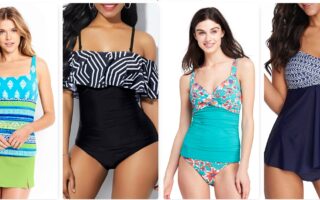 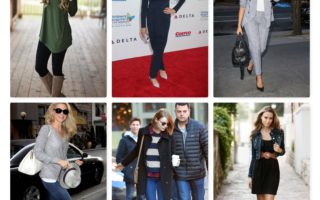 Style Tip: Match Your Shoes To Your Hair Stylevate – A New Way to Shop for Fashion!